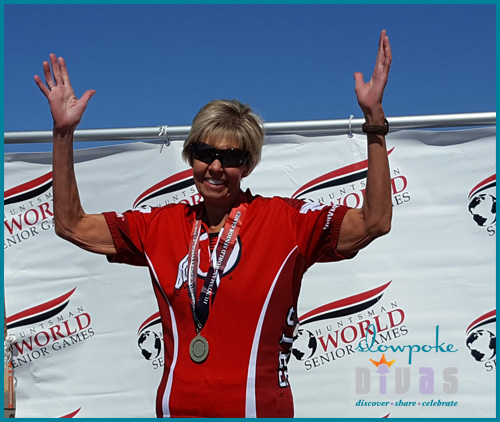 ST. GEORGE, UTAH -- On the former aviation tarmac situated high atop the mesa overlooking the city, hundreds of cyclists came to compete against each other and themselves on a two-kilometer, bone-shaped loop course.

This third day of racing saw the top women continuing to dominate their age groups. Meanwhile, Donna Pope took her first gold in Division III - Recreational, Women 60-64 in the criterium after finishing fourth in the 5K hill climb and third in the 20K time trial. In Division IV - Beginner, Women 55-59, a battle continued between Barbara Kane and Kelli Peay. The pair placed first and second, respectively, in the 5K hill climb, then reversed position in the 20K time trial. Today, they again finished first and second. The ominium champion would be decided the next day at the 37K road race.

The criterium's race length is based on time. All cyclists in all divisions finished on the same lap as the leader of the race. Times are recorded when riders cross the finish line after the winner. Officials didn't pull any riders out of contention from the race.

Race results listed here are from the Huntsman World Senior Games's website at SeniorGames.net. Visit their website for men's results and other information.

Please let us know of any corrections or updates.